The importance of using a Personal Energy Absorber

As we all know, working at height does come with the risk of falling. Luckily, laws are drafted and standards are applied regarding fall protection and the requirements for fall protection systems. The goal here is to keep workers safe and prevent (serious) injuries when a fall occurs.

The standards for fall protection systems are determined by standardization organizations like CEN (Europe) or ANSI (United States). Fall protection systems must meet the design requirements stated in the standards before testing them accordingly. These standards often include terms, abbreviations or values that, for example, engineers use for their work, but are hard to translate into practice by laymen.

In this article we will focus on the importance of Personal Energy Absorbers in a fall protection system by explaining the abbreviations MAL and MAF (often used in standards).

Below we explain MAL and MAF based on the standards that apply in Europe (EN-standard) and the United States (ANSI-standard).

MAL stands for Maximum Arrest Load. This is the maximum load that will occur on an end anchorage when a fall is arrested.

MAF refers to Maximum Arrest Force. MAF is exactly what it sounds like: the maximum amount of force that is allowed to be released on the body of the user when a fall is arrested:

As can be seen above, the anchor is made to endure heavy impacts (MAL), in contrast to the human body (MAF). But what are heavy impacts exactly? Especially on a human body. What does, for example, a 6kN or 8kN impact mean in practice? We’ll get to that later.

First, to give a better understanding of how MAL and MAF are measured, we have drawn a side-view image of a test setup: 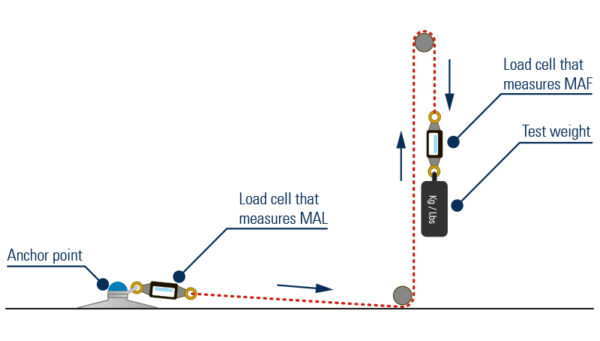 The test weight (representing the user) is attached to an anchor point and hangs suspended after the lifeline passes two pulleys. At a certain moment the weight is released and falls down a specific height. After the fall is arrested, the load cells indicate the force that was produced (1) on the anchor point (MAL) and (2) on the test weight (MAF).

To lower the impact force on the body, a Personal Energy Absorber (PEA) must be added to the fall protection system (obliged by EN 795:2012 and OSHA 1926.502). The PEA is usually combined with (attached to) the lanyard. But, unfortunately, the PEA is sometimes misused or a fall restraint lanyard is used when a fall arrest lanyard is needed. In these situations, a fall can occur without forces being properly absorbed.

The effects of a Personal Energy Absorber (PEA)

When a fall is arrested, the user is exposed to a certain amount of force. The amount of force depends on a number of factors like the height of the fall and the weight of the user. Obviously, the goal is to limit the force on the body to prevent injuries. That’s where the PEA comes in. 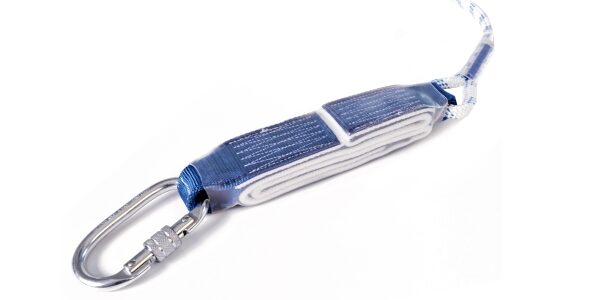 The PEA is connected to the user and deploys automatically when a fall occurs. The stitching of the PEA is meant to tear during the fall, systematically slowing down the fall and absorbing the energy that normally would impact the body of the user.

The amount of force the body endures when a fall is arrested with and without a PEA is shown in the table below:

Table 1: outcome of various tests performed by XSPlatforms. Values given are based on a test weight of 100kg / 220lbs according to standard EN 795:2012

Without a PEA, the only safe working height that meets the Maximum Arrest Force demands as it comes to the impact on the body is 0.5 m or 1.7 ft. So falling the height of the first step of a staircase is enough to exert significant force to the body. A fall with the length of all other heights, can potentially cause serious injuries when not using a PEA.

According to the data shown in table 1, the use of a PEA reduces the impact on a body after a fall arrest with up to 84%. And that’s the difference between being seriously injured or ‘just’ bruised.

Putting the numbers into practice

If you would ask a layman what 1 kN of force does actually mean in practice, there is a big chance that this person has no idea. Which is not a shame of course, but to really understand the impact of an arrested fall and the effects of using a PEA, we put the numbers of table 1 into practice.

As can be seen, the force when falling 1 meter (3.3 ft) without a PEA is 12 kN. Converted to kilogram-force (kgf) and Pound-force (lbf) that’s 1223 kgf or 2700 lbf. You can imagine this is has significant impact on the body. Compared to a real life situation, this force is comparable to a hitting a tree with your car, driving 9.6 km/h (6 mph). This might seem slow, but the impact force on your body has the same weight of a giraffe.

When falling that same meter, but with a PEA, the forces are limited to 1.9 kN (or 193kgf / 425lbf). The same amount of force that a rugby player generates when shoulder tackling a 45 kg (100 lbs) tackle bag. In case you experience a fall like this you would be bruised, but still okay.

Same goes for a 1.5 meter and 2.0 meter (4.1 ft  and 6.6 ft) fall with PEA. The forces on the body won’t exceed 3.8 kN (387 kgf / 853 lbf). Experiencing such forces on the body is not pleasant at all and you might have some (minor) injuries, but compared to the arrest force you would endure without using a PEA, you’re relatively unharmed:

Falling 1.5 meter without PEA will produce a force of 18 kN. That is the equivalent of 1835 kgf (4045 lbf) of force to the body. That is the average weight of a Hippopotamus that is released to the body for a short period of time. You can imagine that your injuries will be serious.

The importance of PEAs

As we have described MAL, MAF and the forces involved, it’s clear that PEAs play an important role in fall protection systems and in preventing (serious) injuries. That’s the reason why the use of PEAs is obligated and PEAs need to be used properly.

Moreover, we want to make users aware of the impact of certain forces to the human body. As you can see, you don’t need much to expose the body to forces that can cause (serious) injuries. Making people aware of this is crucial in order to let them see the importance of the proper use of fall protection systems.

We have made an infographic where the impact forces that a user sustains when a fall is arrested are made visual. You can download, print and use the infographic to make others aware of the importance of PEAs and the impact of a fall arrest when not used properly.